kakashi: Equality for all, please, before the world goes to pieces even more.
Panda: WORD! In other news, saw 6 underground (blah), Spenser Confidential (surprisingly funny and interesting) on Netflix; Aqua-man again ( movie’s cinematography is so pretty but the movie is so cringey; still had fun), Shazam, and Die Hards 1 and 2 on HBOGo. I find it ironic that I seem to have watched more stuff on HBOGo in 4 days than 3 months of Disney+.
JoAnne: I’m still not watching much KDrama – this week it was only King, and there’s really nothing to say about that. I watched Spenser Confidential a while back, Panda – I enjoyed it but if you ever find it anywhere, do not miss the chance to watch the original show (just called Spenser back then.) I also watched Shazam! It was fun – I always like that guy. Can’t remember his name right now. What else? All 3 seasons of Ozark. Starting S3 of The Leftovers. I now have six (I think…it might be more) cross stitch projects going. I picked off any leaves with any defects on every plant on my patio. I cried a lot because the world is shit right now, some of it really close to home. But I also sang Happy Birthday to my beautiful daughter and marvelled over every picture she shared of the treats her sweet guy had lined up for her, too, and he and I laughed over the fact that at 27 she still poses the same way with the same smile when asked to show off her pretty dress, as she did at 3 or 4. That and Lee Min Ho striding purposefully in a long coat, plus Woo Do Hwan looking badass and acting the fool? They got me through a very long weekend.
kakashi: …. and Covid SUCKS. Go home you evil virus.
Trotwood: I’m tired. I don’t know what to say to my students anymore. I don’t know what to say to my mother who was awake the whole night before her 50th wedding anniversary because of the rioting and looters and the National Guard in her neighborhood & is now worried about my 82-year old father who wants to go out to get her some chicken for their anniversary, so she won’t have to cook but doesn’t want him to be anywhere near anyone: violence? disease? Take your pick. I didn’t even feel like watching Ancient Detective or Girlfriend this weekend, so my reviews of the final episodes will have to happen later. All my other reviews were written before the protests began. Sorry, the post is short. 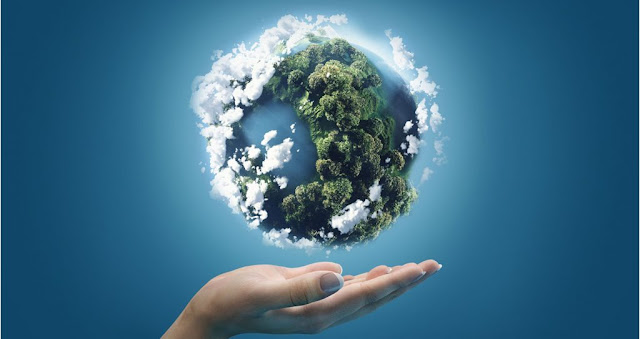 Dinner Mate/Will You Have Dinner With Me?

I was excited about this show and even read the whole manga, but then the casting happened and I became confused because the cast were older and clearly more established in their jobs than the original characters in manga. I actually felt better when I saw the synopsis. I quite liked the first episode. Both the main characters were interesting, and the setup of our heroine experiencing and unknowingly filming what turns out the be the worst day of her life was well done. The humor was interesting and quirky. The second episode started in the same way; however, the end has left us back in stereotypical drama land conflict. It’s like they either changed writers or someone at the top thought they needed to play it safe. Too bad. It really had potential and may very well end up being good, but I don’t have time now. 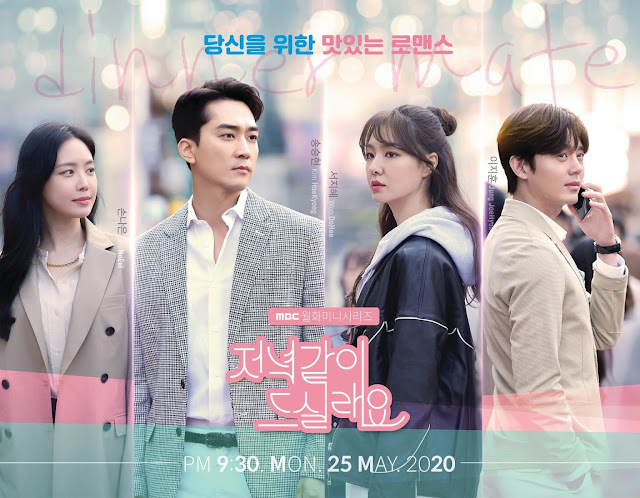 This show may be my favorite show on now. The other world games for lottery numbers was hilarious, the humor can be slapstick and painted in broad strokes, but the tenderness is there. None of these characters—even the characters who are part of the problem of the week aren’t one-dimensional, and I’ve teared up more than once. I’m curious to see why Manager Gwi is no longer with the death detectives because clearly he is still a good demon catcher. I want to know why Kang Bae’s gift has no effect on Yeo Rin. I’m also suspicious of whether even if they reach the quota, the God of the Underworld will still let Wol-Ju off. They only have a couple left, and we still have 8 episodes left. It can’t be this easy.

Where Your Eyes Linger

We all knew from the first episode that despite the devil may care attitude of Han Tae Joo, the one thing he seems to truly care about is Kang Gook. We saw that last week and in this week’s episodes with his blatant interference in Kang Gook’s date, despite what seems like his support, and his rage when Kang Gook calls out their relationship for what it “is”—a bodyguard and employee. It seems Kang Gook understands his own feelings but knows that it’s really better for him to bottle those up and keep them somewhere else. It’s pretty impressive how much they can pack into ten-minute episodes. 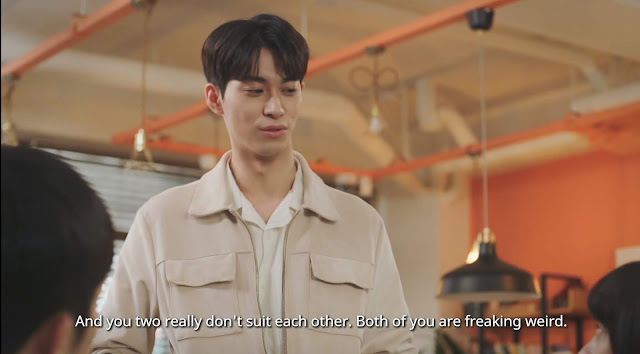 Rental nan mo shinai hito/Rent a Person Who Does Nothing

We have moved on without addressing how long this family is going to survive on their savings to an episode that triggered all sorts of memories for me; the way people treat women out with a baby. I felt for the mother in this episode who just wanted to go her favorite restaurant before it closed. Everyone looked at her like she is a bother with all her baggage and baby and tram. Getting on and off a bus becomes like trying to climb Mount Everest. And don’t tell me that you have not looked with suspicion at a person with a baby at an airport. I gave up on the idea that I would ever eat hot food in a restaurant, and people blame you. The fact that she was never annoyed with Shota when he didn’t help her but was just so relieved that he didn’t judge her was sad and true. 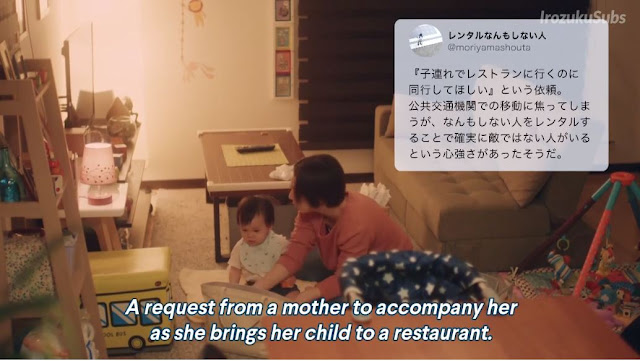 This show was not a show I thought about watching at all. I mean do you need another Thai BL drama about engineers? It took over two years to get it’s act together with cast changes all over the place. But this was the best finale of them all. I mean this episode actually make me fine with the fact that our OTP got together. We had enough closure for it to be a finale but enough for people to really be excited about a season two, which they already promised at the end of this episode. 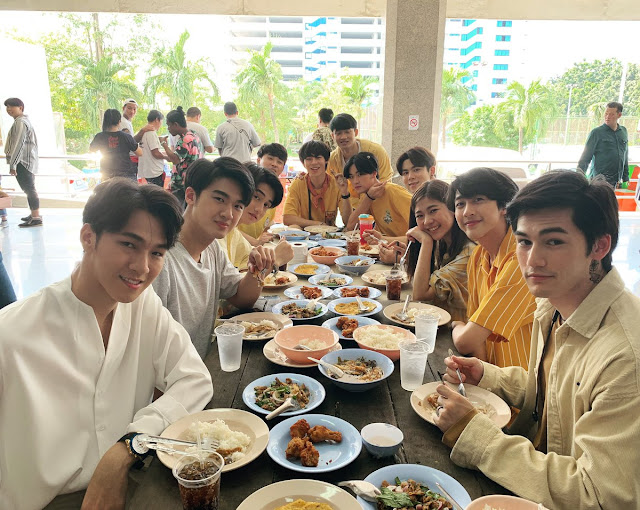 So the body switch has happened and our fangirl is now in the body of one of the guys she shipped with the guy she actually has a crush on. This show reveals some of the mindset of a shipper. She has a crush on a guy, but she doesn’t think she is actually worthy of him but ships him with his best friend who she thinks is worthy, but she really doesn’t know anything about either of them, and while the hijinks ensue, she also is starting to think about whether she really is being as supportive as she thinks when she really doesn’t know enough about her idols to actually help them with what they want. I bet no one thought to see any serious questions in this show. I know I didn’t. I wonder if it’s target audience will even recognize these questions or just pay attention to the cute? 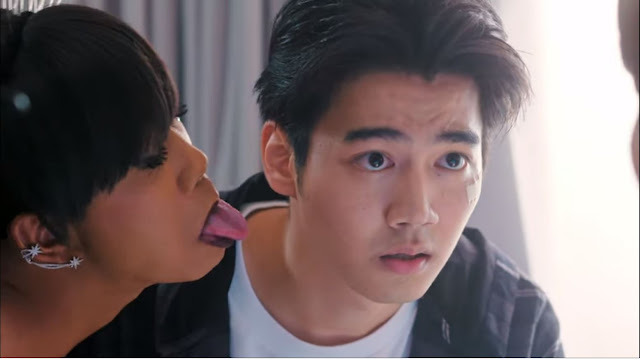