Setting various records in the music scene, South Korean girl group BLACKPINK obtains a new YouTube milestone with their latest bop “How You Like That”. 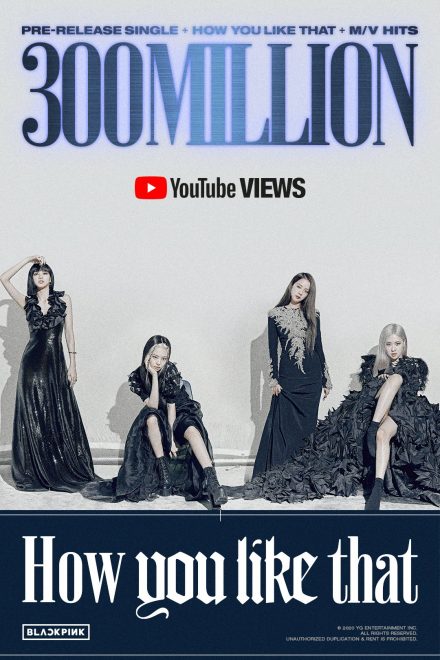 Just recently, the femme fatale group’s music video for their pre-release single “How You Like That” has exceeded the 300-million mark on YouTube. Notably, Jennie, Jisoo, Rosé, Lisa were able to reach the milestone in under a month. The song specifically hit the massive count in around 21 days and 11 minutes after its successful worldwide release on June 26 at 6 PM KST.

Additionally, “How You Like That” has been hailed as the fastest Korean music video to surpass the said YouTube milestone. Previously, BLACKPINK’s 2019 hit song “Kill This Love” held the honor with  32 days and 5 hours to achieve the feat.

Following “BOOMBAYAH,” “As If It’s Your Last,” “Playing with Fire,” “Whistle,” “DDU-DU DDU-DU,” and “Kill This Love,” “How You Like That” becomes BLACKPINK’s seventh music video to smash the impressive feat on YouTube.

Meanwhile, in related news, BLACKPINK recently rose as the top K-pop girl group in July brand rankings. The quartet is followed closely by IZ*ONE and TWICE who placed second and third, respectively.