These K-Pop groups reigned supreme during the early 2000s, and if they are to make a comeback in this time, it would be legendary.

The early 2000s were defined by slide phones, scene hair, and frosted lip gloss. It was also the era when some of the most iconic K-Pop groups conquered the charts, and we wouldn’t mind having them back! 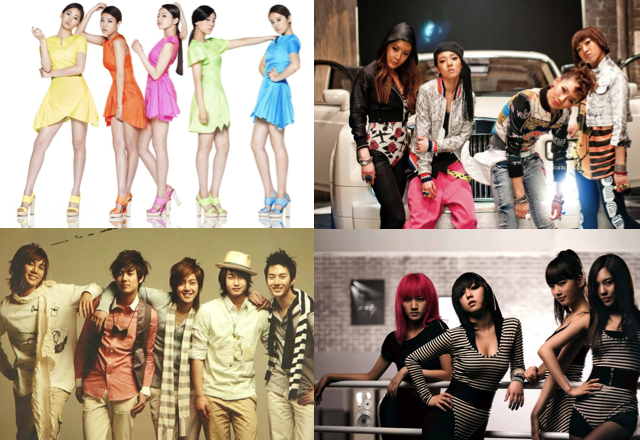 The start of the 21st Century signified simpler times when the millennials of today were little kids just going to school, hanging out with friends, and listening to great music on their mp3 players.

In this list, we present you with a nostalgic walk down memory lane, as we shine the spotlight on 6 of the most legendary K-Pop acts that were the soundtracks to our early 2000s. You ready for this brilliant blast from the past?

Who could ever forget one of the fiercest girl groups that ever walked the planet? Composed of Dara, CL, Minzy, and Bom, this formidable quartet was pretty as a picture, yet tough as nails. Their strong aesthetic and spectacular music was the epitome of girl empowerment times ten! 2NE1 brought the fire and we would love to see them set the music scene ablaze again.

Min, Meng Jia, Bae Suzy, and Wang Feifei made headlines with their debut in 2010. With sensational tracks like “Bad Girl Good Girl”, “I Don’t Need A Man”, “Love Again”, and “Step Up”, Miss A was one for the books. Raise your hand if you’d love to see these gorgeous girls show off their moves on stage once more!

SS501 debuted in the music industry in 2005. The handsome quintet was everything that you’d look for in a boyband; they had melodic vocals, showstopping dance moves, and exceptional visual power. Kim Hyun Joong, Park Jung Min, Heo Young Saeng, Kim Hyung Jun, and Kim Kyu Jong were a combination of explosive talent and were undeniably one of the trailblazers of the early 2000s. Looking back, we really miss their anime-inspired hairstyles and cool biker gloves.

This trio could easily be described as the trifecta of talent. Debuted in 2007, Kim Joon, Shin Min Chul, and Park Yun Hwa were soon joined by Park Han Bi and Joo Chan Yang. Charming their way into people’s hearts with hits, such as “Paradise”, “Something Happened to My Heart”,  “Wish Ur My Love”, “Born to the MAX”, and “Believe”, T-Max has solidified their status as music mavens. We can already imagine their screaming fans if they ever decide to make a comeback.

2007 marked the year that Wonder Girls broke the music scene with their quirky tracks and hypnotic dance moves. The choreography to their massive hit, “Tell Me”, shattered barriers and made its way to fans all over the globe. There probably wasn’t a person on the planet who didn’t know the iconic steps to their viral song. Followed up by “Nobody”, “Sweet and Easy”, and “Wishing On a Star”, the Wonder Girls have proven that they live up to their name. If ever HyunA, Sunmi, Sohee, Hyelim, Yubin, Sunye, and Park Ye Eun would reunite as a band, we’d be ready with the matching dance moves.

Yoon Bora, Hyolyn, Kim Da Som, and Soyou were at the top of their game with phenomenal songs like, “I Swear”, “Loving U”, and “So Cool”. The group of four fabulous females took the entertainment industry by storm, and we wouldn’t mind seeing that phenomena again!