kakashi: We move on, swiftly towards something… could it be the end? The end of suffering? The end of love? The end of… meandering storytelling?
JoAnne:  This would be the only area where I would accept the end of social distancing.
. 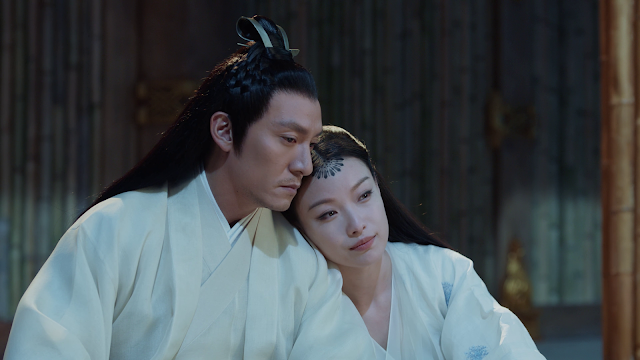 Tensions are high! Ling Xi’s mommy wakes up, gets the update about her daughter and everything else from her trusted Popo – mommy is so moved! – but wants to keep it a secret she has woken up. To buy herself some time. Well. That won’t happen, because Jing Xiu is already at the door and barges in.
Time for what?  More face tattoos?  I forget what plot is being plotted. 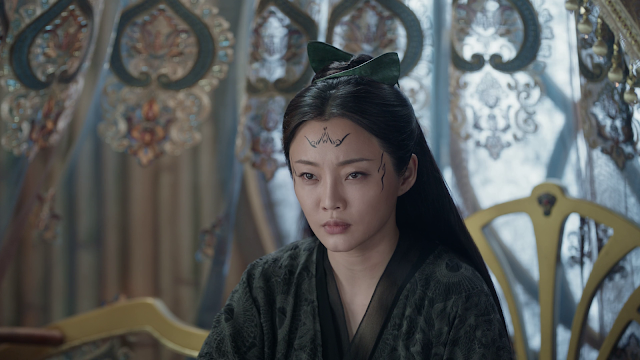 All cards are on the table. These two fully know what they are in for: one of them has to die. Jing Xiu is stronger, they both know it – but the Queen Ling Yue begs him to spare the lives of her two daughters. He will. Then, the ugly demon thing strikes down Grandma Shi when she tries to intervene. And Ling Yue withdraws her life bead, handing it over to him.
Ohh, that plot.  This guy…I’m still very conflicted about him.  Are you?  I mean, part of me thinks he has every right to be as mad and messed up as he is but on the other hand… 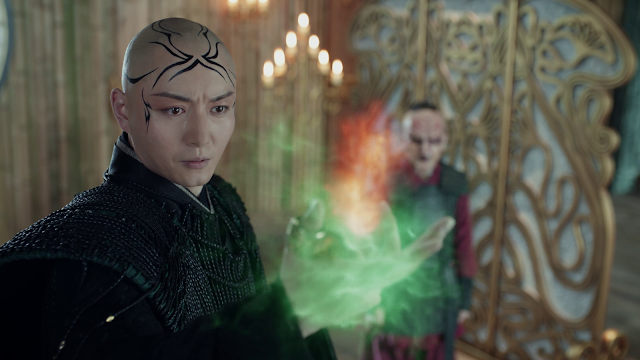 That’s when Ling Xi arrives outside the door, with the medicine she has been cooking for her mommy. Ling Yue calls out to her and Ling Xi runs in for a tearful reunion. I find it a little funny that the two look exactly the same age 😀
Yeah, but only until one of them hits 70 and then BAM overnight grandma.  I’m seriously jealous of that ability, though. 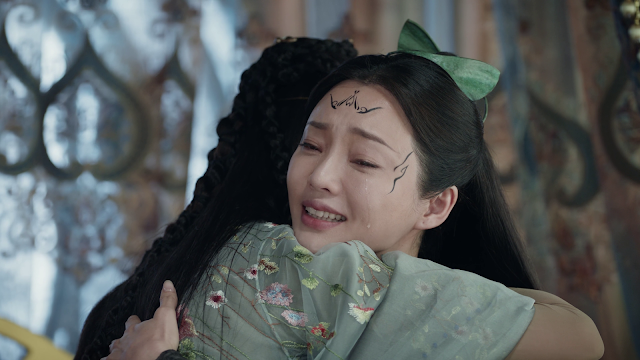 Ling Xi soon realizes something is not quite alright with her mother – while Jing Xiu pretends to be concerned. If I ever had a soft spot for this man, it’s now entirely hardened. As soon as Ling Xi has left to fetch Qing Yao from Peach Forest (she isn’t there, she’s in the mortal world), Jing Xiu destroys Ling Yue’s life bead. Asshole.
You’re right, I know you’re right.  If he laid it out on Reddit I’d definitely be ‘YTA, dude.’

Her mother’s sudden death makes Ling Xi very suspicious. She won’t let anybody near her body even though the funeral rites should begin. 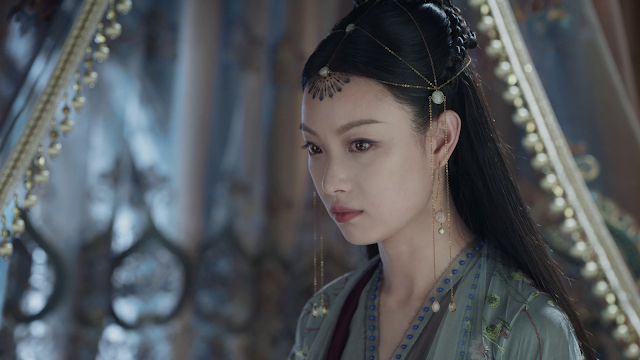 Jiu Chen hears about what has transpired and rushes to the Spirit Realm – when he sees the grieving Ling Xi, he hugs her tight without a word. And she starts sobbing. GoW puts her to bed (she must be absolutely exhausted) and then Qing Yao comes and confirms that she didn’t die of poison, but because her soul has scattered. Which proves nothing, as GoW puts it. Where is Grandma Shi? he asks. She might know more. But Grandma Shi is dead… killed by Jing Xiu’s men, of course.
The man is thorough, I’ll give him that. 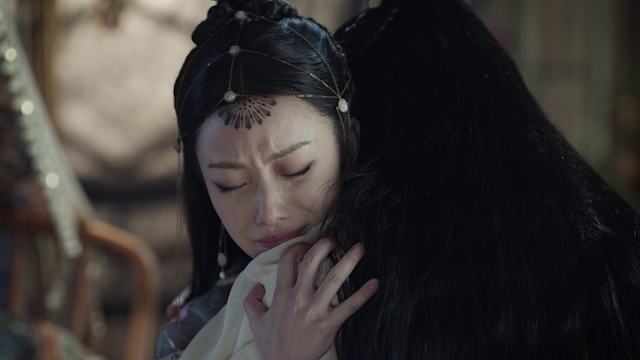 Detective Jiu Chen rushes to Jing Xiu’s abode and confronts him with the murderous truth – yeah… but where’s the evidence? GoW vows he’ll find it – and attacks. Because he can? An impressive show of force, I’d be quaking, Jing Xiu.

Ooooh, not the Foggy Finger of Death! 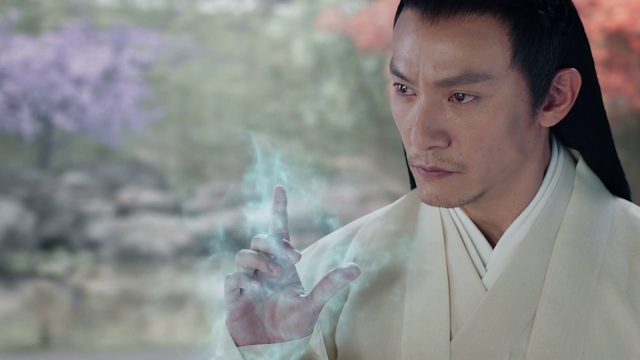 GoW can convince Ling Xi to have the funeral. Poor, poor Ling Xi – why couldn’t she have some time with her mother? I’m glad she has Jiu Chen to lean on in these hard times though. He wants her to come with him but she wants to stay – her Tribe needs stability in these turbulent times. I love that she is ready to be the one to ensure it – and I love that he lets her do this without an argument. At least until the matters of her mother’s death are settled.
He’s probably weak from fighting.  She could take him. 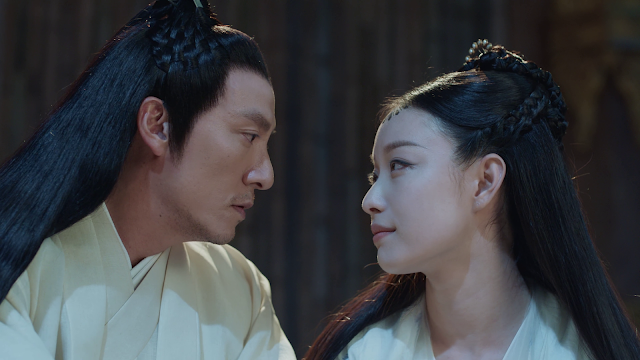 The majority of the Spirit People want Jing Xiu as the next Tribe leader, some are rooting for Bao Qing. Nobody even knows Ling Xi is eligible. Time for Bao Qing to be bitchy, of course – even though she has nightmares of Jing Xiu killing her mother. Ling Xi puts her in her place while Jing Xiu is hard pressed to decide whether to take the throne or not. If he doesn’t, civil war could happen. Is he thinking about putting Ling Xi on the throne? Nice. Less nice… The search for the new Demon King is ON. 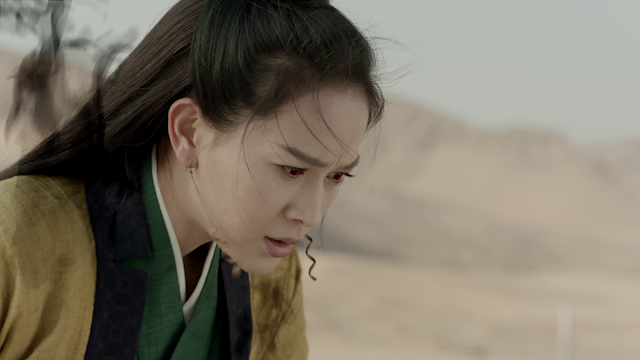 Love that GoW is such a sweetheart now. Totally understanding and supportive. Withholding sex helps, people, I tell you.
Unless you want sex.

Don’t love that the Demon King shit still isn’t resolved.
The longest plot no one cares about in the history of CDramas.

Am torn between liking and disliking Jing Xiu’s storyline again. I like that he’s a conflicted villain. I don’t like that he still has to do stupid villain things.
I mean…he IS an asshole.  But I still like him a little bit.