Finally! Yeon Joo arrived at a decision that makes all fans of Backstreet Rookie happy!

Going back and forth with her decisions brought about by misunderstandings that can’t be denied anymore, Yeon Joo makes a painful decision to end her relationship with Dae Hyun. Charting in relatively high back-to-back scores for its latest episode, the series hopefully goals for a second half adorable sprint that viewers would be thankful for.

In another awkward situation between Dae Hyun, Saet Byul and Yeon Joo, a new character introduces herself. She even made it harder for the hero, who has been praying for the ground, to swallow him whole right at that moment.

His mother spills all the good things about Saet Byul and how she has been living with them raising the anger meter of Yeon Joo. The latter is not aware that Dae Hyun has not told his parents yet that Saet Byul already quit.

Dae Hyun’s mother happily quips how she loves Saet Byul like her own daughter. Feeling frustrated, Yeon Joo politely excuses herself and rushes to leave the house. Dae Hyun chases after her, but she tells him that she’s tired of all his excuses. (me too)

On a bright side, a budding romance that we know will turn to a disaster is blooming between Geum Bi and Dal Shik. The two are both thankful talking over the phone. One is happy chatting with her favorite author; while the other is elated meeting his favorite fan. 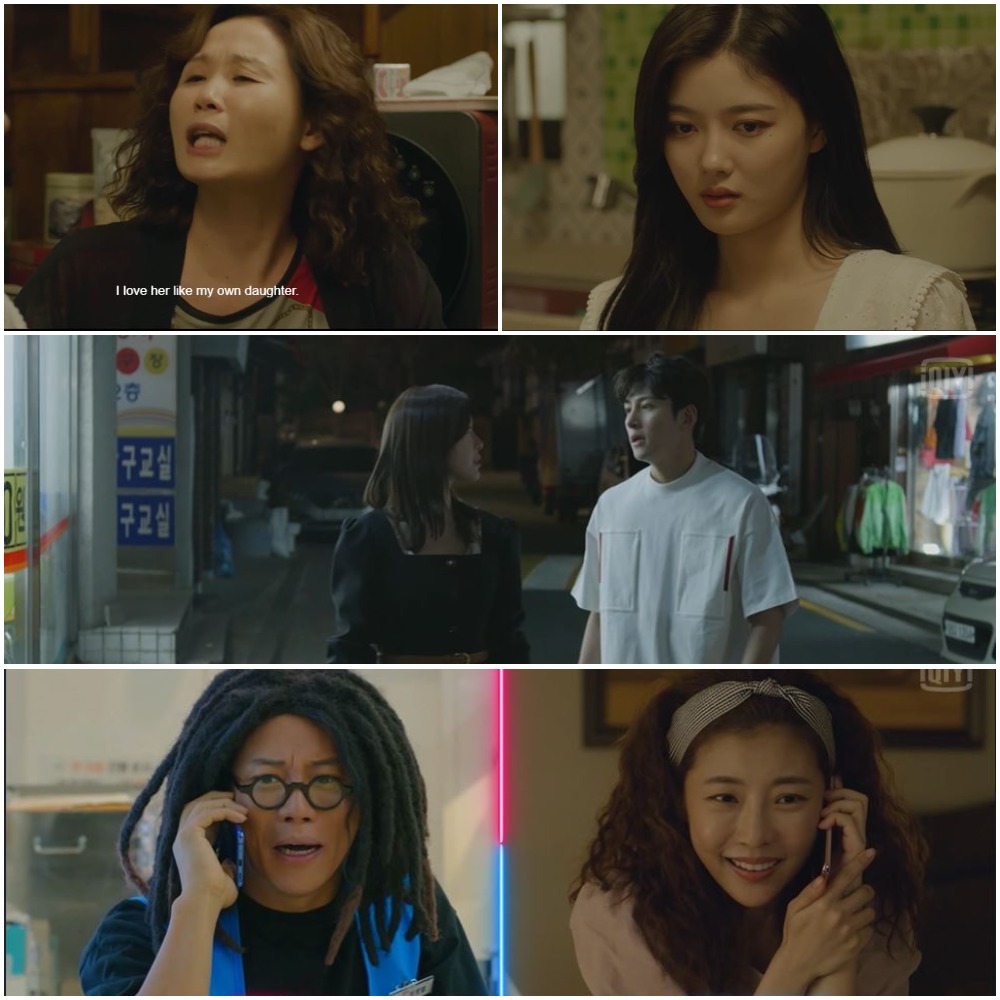 Agreeing to his demand, Yeon Joo’s mom knowingly smiles. The moments he left the house, she calls her secretary and retaliates. The payback? She summons Dae Hyun’s mother, who can’t be any more happier to sign up a hefty amount of insurance with her.

Yeon Joo’s mom shares in passing about her daughter who is dating a commoner. Not knowing that Dae Hyun is the boyfriend of her daughter, she replies how she should meddle in her daughter’s business if her judgment is clouded.

She even remarks that the boyfriend could be dating for her status delighting Yeon Joo’s mom who praised her for being on point the issue.

Yeon Joo’s mom did not stop there. She also reels in Dae Hyun’s father for a job as a special driver with top-notch package. Owing to his parents happy job moments, they enjoy a samgyupsal feast at night. 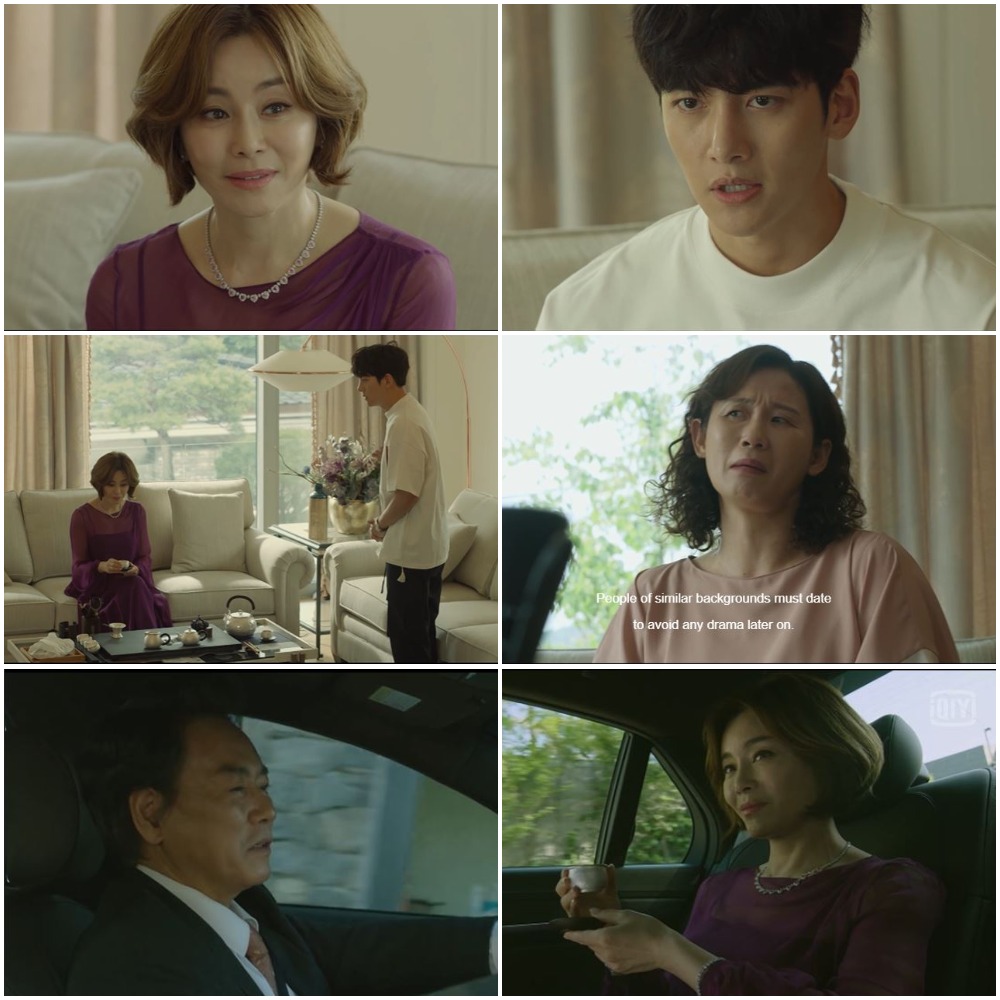 Dae Hyun’s career is syncing to his love life as the convenience store received complaint of sold expired sausage. Seung Joon takes advantage of the opportunity and tasks Yeon Joo to deal with it.

Knowing that the complainant is confirmed habitual offender to get money, Dae Hyun refused to settle it with money no matter how much his friend from the head office convinced him.

Fulfilling his promise to Saet Byul, Ji Wook checks on Eun Byul’s status. Contrary to the agency’s press release that she’s doing great with her group, she has actually reached her saturation point for doing all the house chores in the dorm.

Dragging Dal Shik to her new backstreet mission, they scare the treacherous complainant to agree for a lesser amount of settlement money. 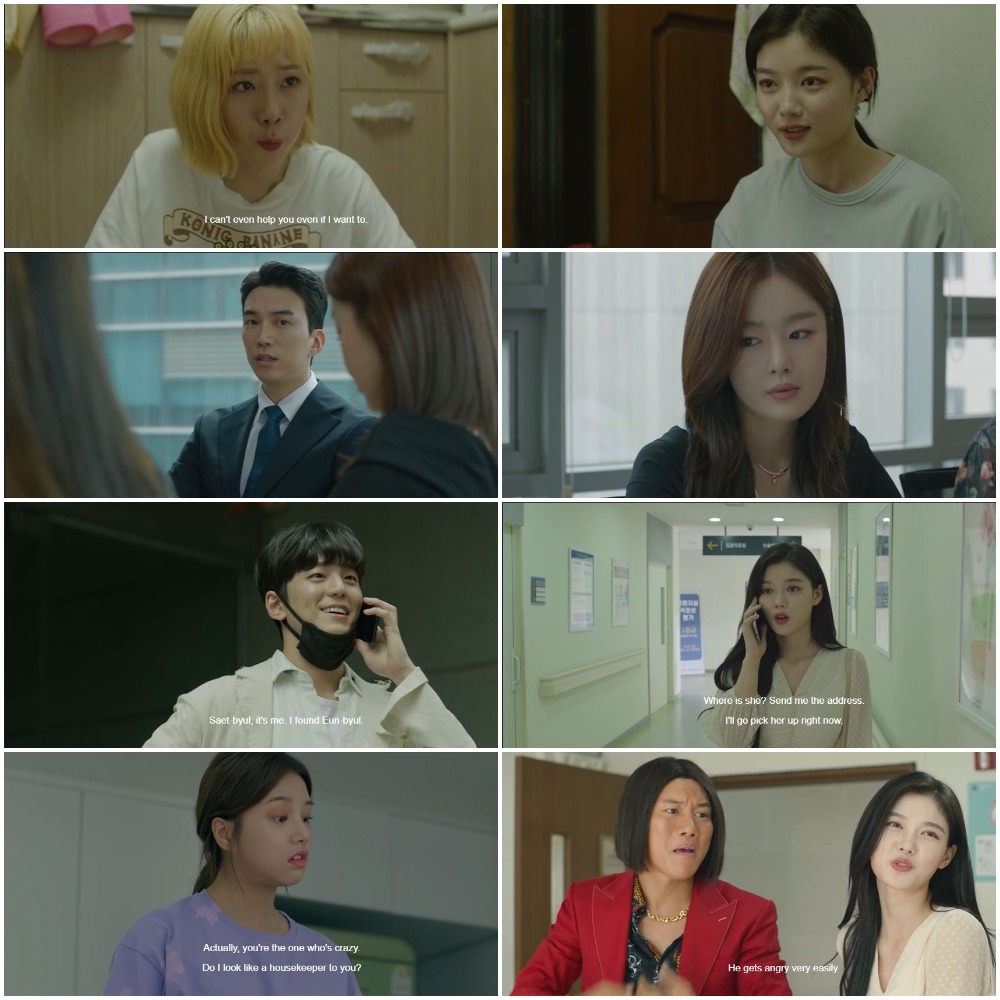 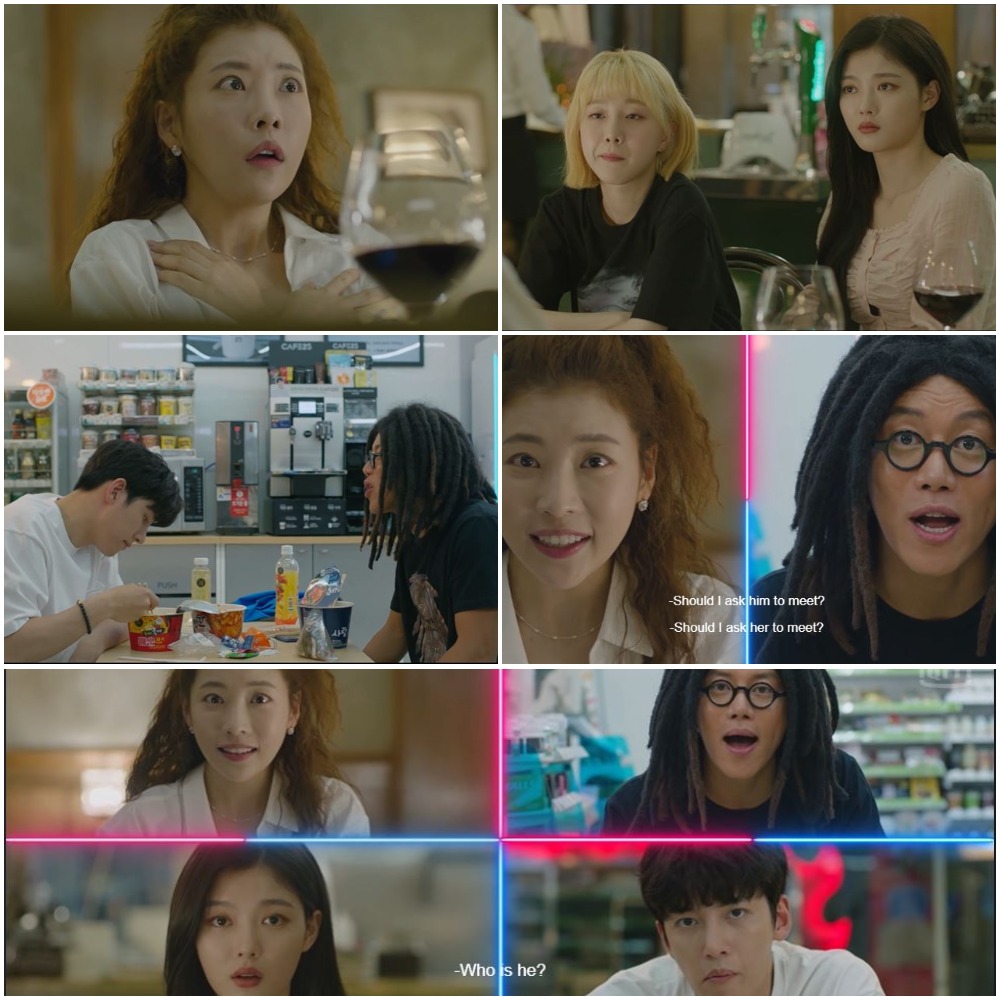 Bringing a good news to Dae Hyun, Saet Byul tells him that she has settled with the complainant. But, when it sank to his thoughts, he chides on her decision since he does not have any intention of backing down.

Ji Wook looks for Saet Byul at the convenience store and learns from Dae Hyun about how she was scammed and that she quit her job. Taking the opportunity to voice out his concern, he tells Dae Hyun to at least shed a little concern for Saet Byul.

Finding Saet Byul in deep thinking, she was surprised how he found her. Ji Wook responds how he cares a lot about her and reminds her to love herself more and not to worry about her sister. Offering his place, he tells her how he does not want his friend to be jobless and homeless at the same time.

They sneak in to his place unaware that a paparazzi has been following them. Happy for Ji Wook’s success, she marvels at his beautiful home. She unpretentiously replies she’s hungry when he asked if she wants some food.

While slurping noodles, Ji Wook throws another surprise and told her that he got Eun Byul’s practice video. Moving close to watch the video, Saet Byul nonchalantly touches his hand in close proximity which made Ji Wook, who secretly likes her, nervous. 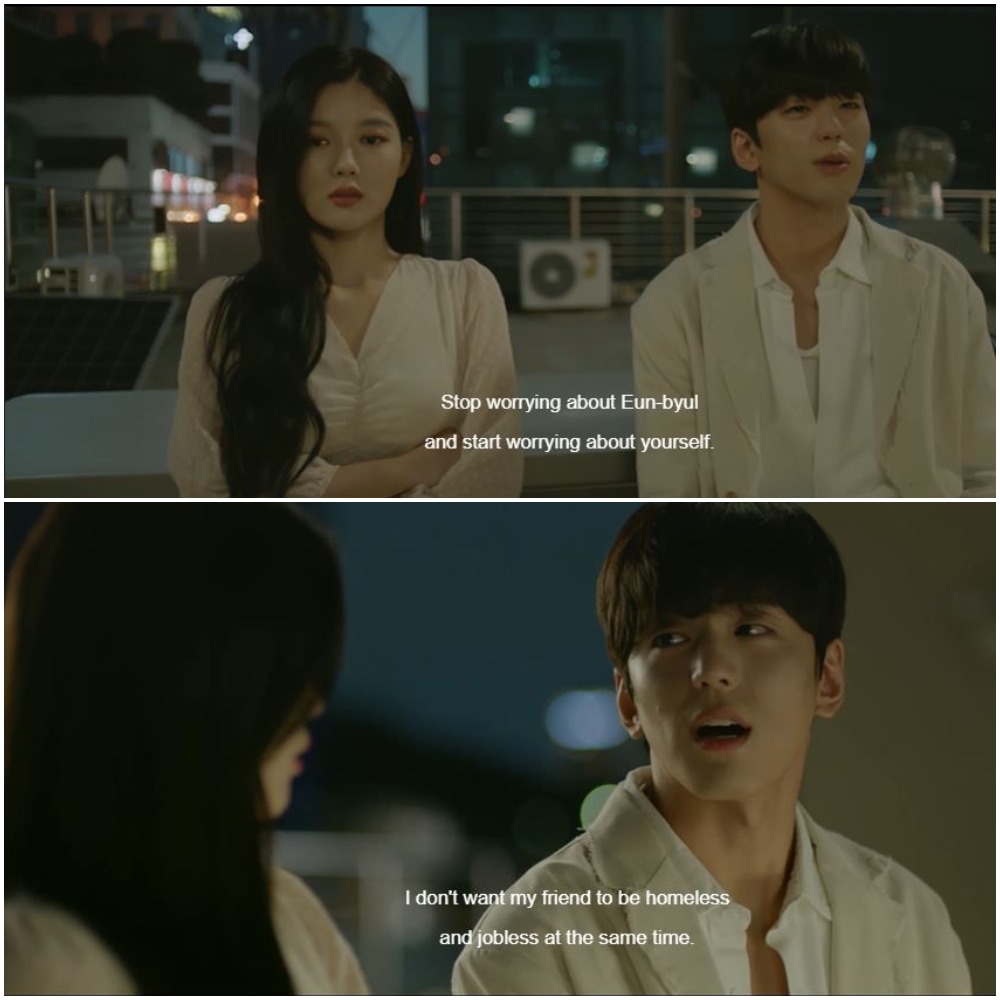 In the morning, Yeon Joo sets to go to work and her mom prepares a personal chauffeur for her. Unaware that her driver is Dae Hyun’s father, she impassively responds when she heard him introduced himself.

Meanwhile, Saet byul calls her promo manager to check for some job, and she got a reply that he will be away for a while. Unable to tell it straight to her face that he was asked not to give her job anymore by Seung Joon last time.

Dae Hyun calls Saet Byul to the store and explains that he requested for sanitation inspection to mediate in the complaint. He tells her that once the report is done and the complainant is not able to present an evidence, the mediation process together with the police will proceed.

When she asked why he summoned her, he lectures how he wants her to do the right thing every time by not doing violence, and not to always resort to pleading. Indignant, Saet byul bravely responds that she does not agree to his way and that he is a show off.

Yeon Joo sends a text message to Dae Hyun for them to meet up for dinner. Delivering his practiced explanation, he apologized for not telling her about Saet Byul’s case.

Yeon Joo includes noodles in the soup surprising him since she does not like the food setup like that. Yeon Joo responds that since it will be their last meal, she will concede to his preference.

She breaks her silence, then breaks Dae Hyun’s hearts by telling him to find another person that suits him. 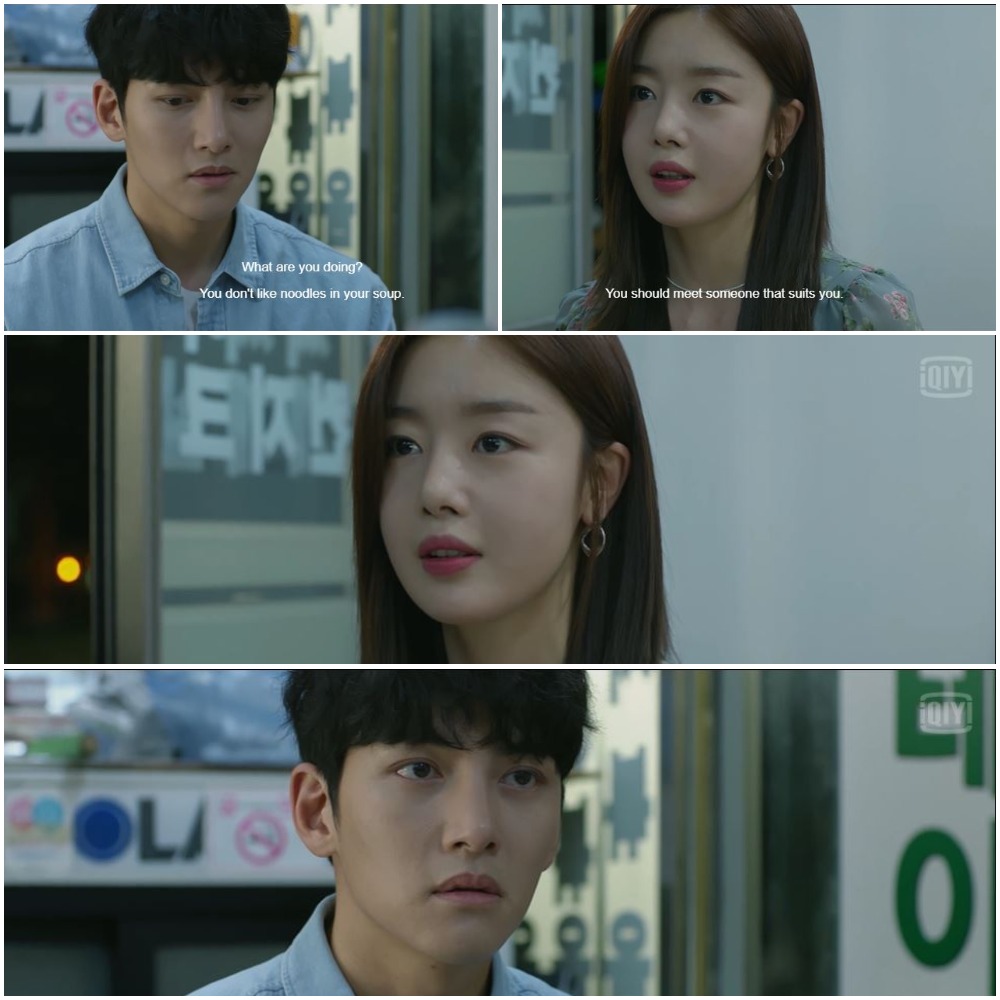 Finally! I don’t need to volunteer on Yeon Joo’s behalf to represent her in cutting romantic ties with Dae Hyun. I also appreciate that she used the apt words to justify why it really cannot work between them.

Let’s hope that Dae Hyun passes the 5 Stages of Love Grief quick, like done in Episode 10 quick, because the plot needs to hurry in propelling the main romance highlight in seven episodes.

My limited Math fortunately is best in calculating the progress of the story. Since, we did not get much, and we won’t be getting any moving forward from the paraded conflict; at least let’s hope for a fan service gift set. *chuckles.

Right now, I am thanking the strong supporting characters of Backstreet Rookie, particularly Geum Bi and Ji wook. Dae Hyun’s parents and Yeon Joo’s mom also suit up well to their roles. They break the growing annoyance by directing the lack of love development into focusing on their own agendas, regardless if unexpected, sad or bad.

However, there’s still an unsettling feel since Yeon Joo’s mom threw in a degrading move to Dae Hyun’s parents. If ever Yeon Joo or Dae Hyun or both learn about it; let’s not wish for another bout of Yeon Joo feeling bad about her mom’s intention. Dear Dae Hyun, just give up. All kdramafans watching the series have your back, please. *wink

Saet Byul is set to have a looming complication that will involve Ji Wook. Any additional when she has plenty of woes on her plate is deemed excessive already. Solving her three problems in seven episodes would provide ample time for her to completely receive a dancing in the air happy ending. Something she deserves, and something that would feel more worth it, if Dae Hyun will be part of it.