The “House on Wheels” trio excitedly welcomed IU to join their journey in the latest episode!

The program includes cast members Sung Dong Il, Kim Hee Won, and Yeo Jin Goo traveling around Korea in a portable home and bringing along people who are special to them, such as friends or family. IU was invited as the guest for the July 23 episode, after working with Yeo Jin Goo on “Hotel Del Luna” and with Sung Dong Il on “Scarlet Heart: Goryeo.”

Sung Dong Il teased Yeo Jin Goo before she arrived by saying, “The guest coming today is someone Kim Hee Won hasn’t even acted with before. But you went as far as acting as ‘lovers’ with her. You’re going to be in charge of everything for this trip.”

Kim Hee Won and Sung Dong Il then jokingly began to express doubt about whether or not IU and Yeo Jin Goo are actually friends, so Yeo Jin Goo suggested they give her a call.

IU sounded sleepy when she answered the phone, and Yeo Jin Goo asked in surprise if she’d just woken up. IU laughed and said, “I was joking. I’m on my way. Have you got lots of delicious food ready for me?”

Yeo Jin Goo asked what she wanted to eat, and she replied right away, “Meat.” IU then said hello over the phone to the two older actors.

While they waited for her to arrive, Sung Dong Il pointed out that they should figure out how they were going to address IU (as there are many ways to address a person in Korean, with varying levels of politeness and titles based on relationships). Sung Dong Il shared that he used to call her by her singer stage name, but he said he thought they should call her by her real name, Ji Eun.

Yeo Jin Goo said that while he’d called her “Ms. Jang Man Wol” during “Hotel Del Luna,” he now called her “Ji Eun noona” after they became closer. The term “noona” is used by men toward older female friends or sisters. 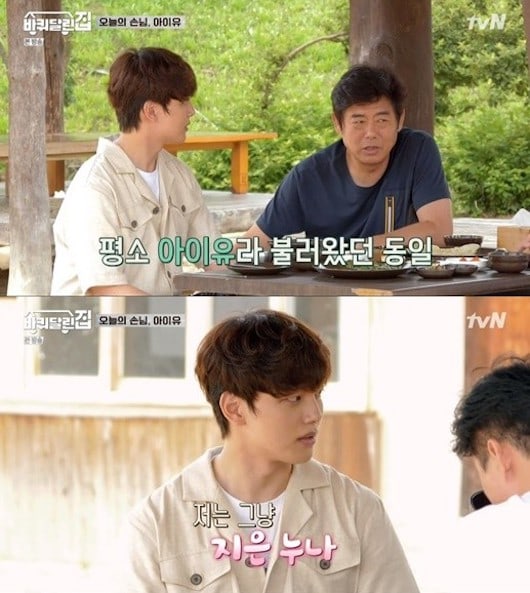 Taking on responsibility for IU during her stay, Yeo Jin Goo worked hard at getting the portable home’s tarp and deck ready. Meanwhile, Sung Dong Il prepared a paragliding experience for her.

IU then arrived, pulling many pieces of luggage along behind her. The trio warmly welcomed her to their campsite as Yeo Jin Goo helped carry some of her things, and the guys set up a chair and mat for her. Yeo Jin Goo had been so busy preparing everything in the hot weather that he hadn’t even had time to wipe his sweat, which made IU laugh. She got a napkin out of her bag for him, giving one to Kim Hee Won too. 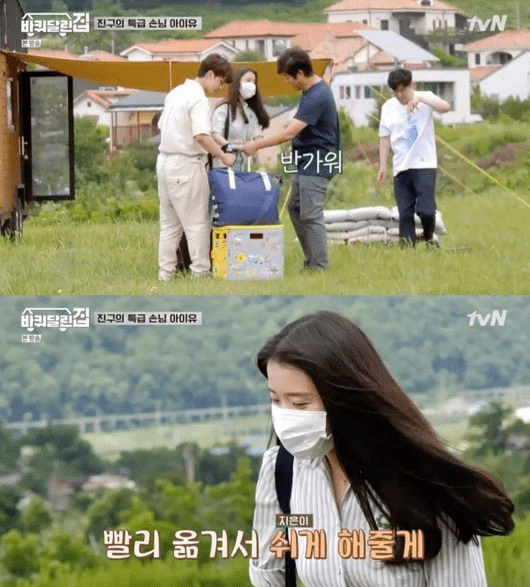 The group rested in the shade, enjoying a cool break from the sweltering heat, and IU delighted the guys by revealing what she’d brought for them.

Her gifts included organic vegetables grown by her mother, coffee from her father that he’d roasted himself, and side dishes from her mother for them to eat along with the meat later on.

Her next present was a foldable cart that she’d decorated for them to use when they go for groceries. She’d added stickers representing the three men and also the words “Slow house” to represent their lifestyle on the show, although Kim Hee Won joked that to them it felt like they were always fast. 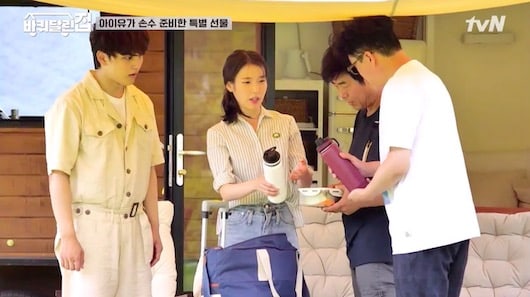 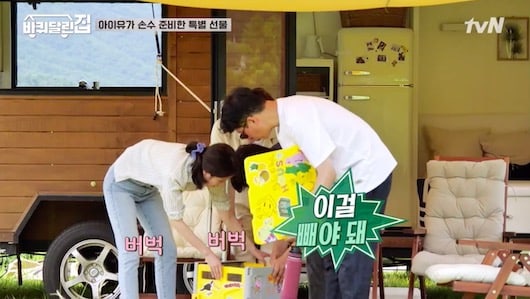 When Sung Dong Il opened the coffee and expressed how much he loved the smell, IU explained that her father’s hobby was making coffee. Sung Dong Il joked that Kim Hee Won wouldn’t be able to appreciate such great coffee, and Kim Hee Won retorted that IU doesn’t drink coffee much either.

“How did you know that?” asked IU in surprise, and they explained that Yeo Jin Goo had told them. IU was impressed and said, “Ohhhhhh!”, which made Yeo Jin Goo smile from inside the home.

IU introduced the different types of coffee to the impressed guys, and she admitted, “Our family members don’t know much about coffee, so even if my dad says to us, ‘This is pure art. Take a sip,’ our family doesn’t give good reactions.”

“I want to be a part of your family,” said Sung Dong Il in envy.

Yeo Jin Goo then said, “I’ll try hard.” Kim Hee Won stared at him for a moment before saying, “Were you planning to get married today?” As Yeo Jin Goo and IU laughed, Sung Dong Il joined in the fun to say, “Whenever a guest comes you make a big announcement.” 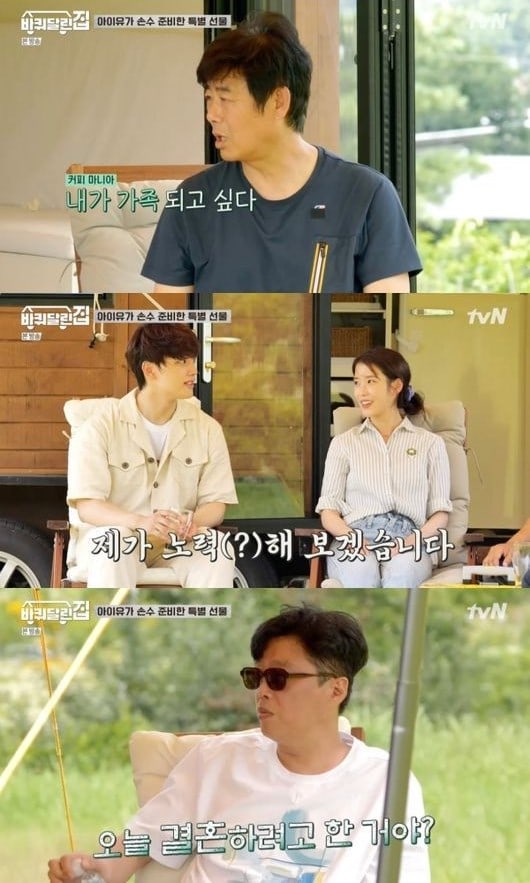 Later on, the four had a great time paragliding. At first, IU expressed her worries about going paragliding for the first time. When the instructor called her over, IU hilariously pretended not to hear him, making the two former co-stars laugh. However, Yeo Jin Goo cheered her on by saying, “I’ll be here clapping for you!” 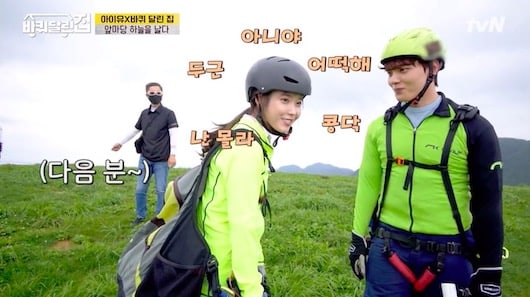 When she finally soared into the air, she screamed at first and then was amazed by the beautiful scenery below her. Yeo Jin Goo yelled in excitement and amazement too when he got in the air. “I really wanted to try paragliding,” he said. 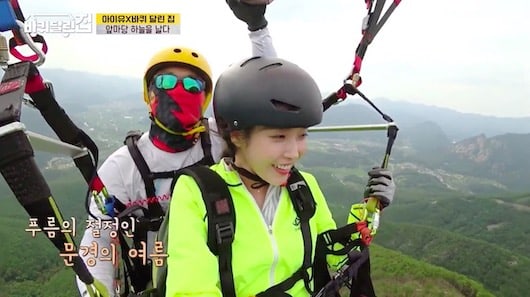 IU spotted Yeo Jin Goo and they called out to each other. “Are you having a good time?” she yelled to him, and Yeo Jin Goo’s partner got them closer together by spinning around, as IU watched in surprise.

“Isn’t it scary?” IU yelled over to Yeo Jin Goo when they were close. “I’m okay, but the spinning is… it’s really the best,” said Yeo Jin Goo with a thumbs up as he recovered.

As IU looked around her, she remarked, “This will be a great memory. I had no idea I’d ever experience a day like this in my life.” 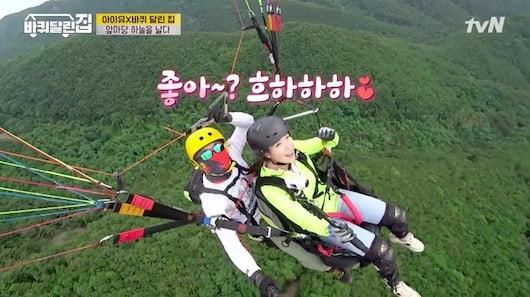 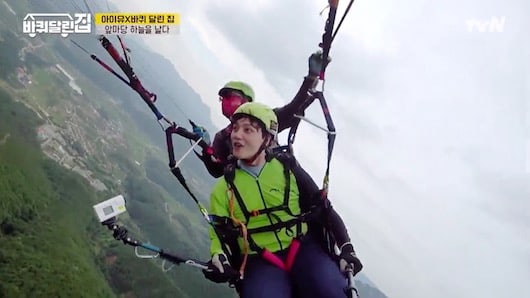 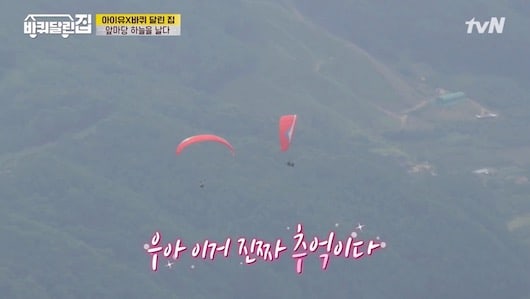 Back at the portable home, Yeo Jin Goo prepared food for his guest IU. She came by to peak through the window at his work, and she said in surprise, “You’re really good, seriously. You weren’t lying about having cooked a lot before.”

Yeo Jin Goo said, “I just cook at home on my own.” As she watched him, he said, “Don’t do that. I get nervous if you watch me,” and she smiled. 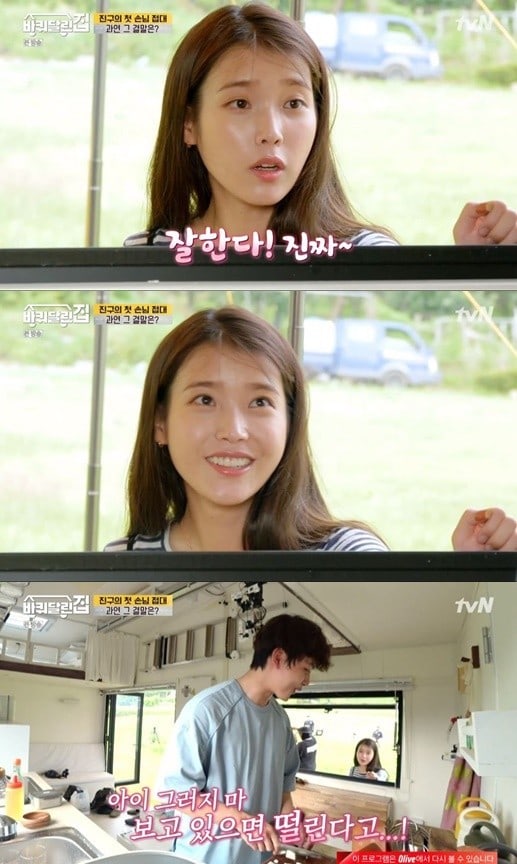 Their trip will continue in the next episode of “House on Wheels,” which airs on Thursdays at 9 p.m. KST.