The Honor X10 Max 5G is scheduled for official announcement in the second half of next week and it’s already passed certification at the Chinese telecom regulator TENAA. A few days ahead of launch we’re now being treated to a GeekBench listing. 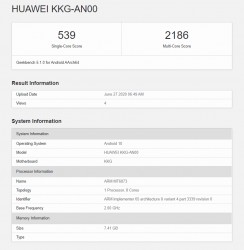 The benchmark gives us a glimpse of how the CPU of the 5G-capable Dimensity 800 chipset (a.k.a. MT6873) compares to rival midrange offerings. At 539 points in the single-core test the X10 Max 5G ranks slightly below the Snapdragon 765G equipped Moto Edge and LG Velvet (both at 586 in our testing), with the Galaxy A51 5G (Exynos 980) scoring higher at 677 points. The Honor strikes in multi-core performance, its 2186pts being noticeably higher than the 1800-to-1900 ballpark of the other three phones mentioned.