Baskin-Robbins has announced that it may take legal action in response to the leak of BTS’s unreleased commercial.

On July 17, Baskin-Robbins Korea released an official statement on its Twitter account after BTS’s upcoming commercial for the brand was leaked online.

We are making an announcement to the many people who are looking forward to seeing Baskin-Robbins and BTS come together. The commercial video that is currently being spread on social media is not the final cut, and it is an unfinished video. The individual spreading [the video] may be held legally responsible, and we hope that you will refrain from spreading or sharing it until the official video is released.

However, the announcement drew criticism from a number of BTS’s fans, who complained that the statement appeared to be directed at fans, even though there was no evidence that it was a fan who had leaked the commercial. Shortly afterwards, Baskin-Robbins Korea deleted the tweet.

Earlier this month, Baskin-Robbins officially announced that BTS had been chosen as the latest spokesmodel for the brand, stating, “BTS will be promoting our new ice cream that will be released next month through videos and photo shoots. We will be unveiling the commercials next month through TV and social media.” 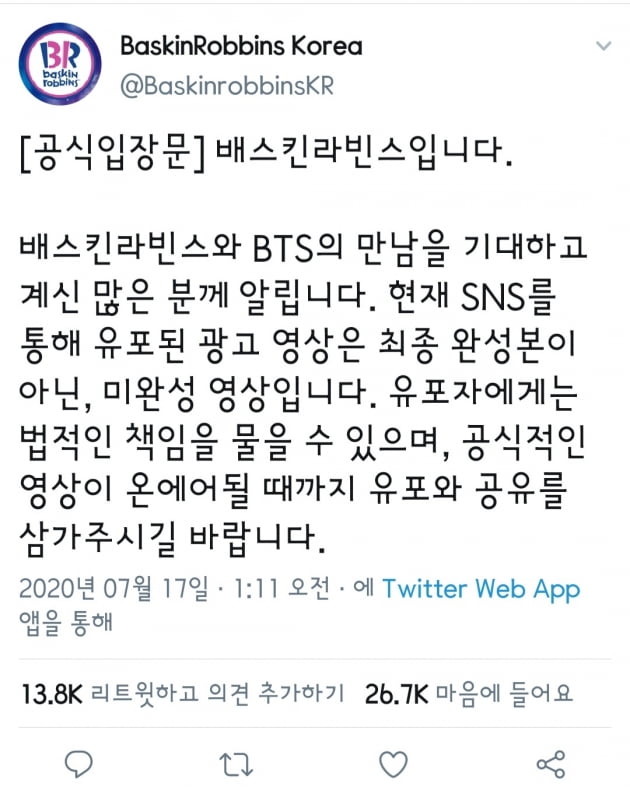